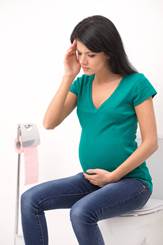 Indigestion in pregnancy is triggered partly due to hormonal changes, and later due to the growing baby in the womb that puts pressure on your stomach. About 8 out of 10 women experience indigestion during their pregnancy.

Heartburn is a burning sensation in the chest that is caused because of the stomach acid passing from your stomach into the tube that leads from the mouth to the stomach. Try these simple tips to reduce heartburn –

Constipation during pregnancy can be caused due to a couple of reasons during pregnancy such as your hormones as well as pressure on your rectum from your uterus. Implement these simple changes in your lifestyle to get rid of the problem–

The symptoms of indigestion remain the same during pregnancy as for anyone else, and it can commonly cause bloating and burping. Here are a few changes you can make to your lifestyle to prevent gas and bloating –

You are about to leave the Simmom.in website. Was this your intention? If so, click ‘OK’ to confirm, but if you wish to stay click ‘Cancel’. If you do leave this page please be aware that Abbott will no longer be held responsible for content.

Do you find the article interesting?

Thank you for subscribing to our Newsletter.